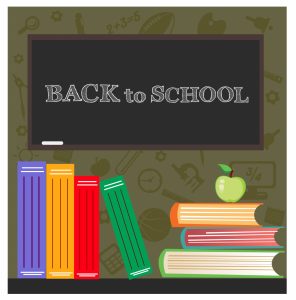 Summer is coming to an end. Amid the squeals of last minute vacation fun, we’re faced with that dreaded list of back to school supplies. Stores are filled with harried parents and less-than-thrilled kids of all ages, searching for pencils, glue sticks, dry-erase markers and boxes of tissues – things that will make them ready for their new school year. And although their backpacks may be filled with those necessities, our children may still not be ready. Because three of the most important school supplies can’t be bought at Office Depot or Wal-Mart. They’re the Three C’s: Courtesy, Courage and Confidence.

Courtesy is an important school supply. A student who is courteous stands above the average student. A child who looks a teacher in the eyes when talking to her, or lets another child go ahead of them in line without pushing and shoving is a child who quickly earns the respect of his new teachers and other adults in the school. Children have opportunities every day to demonstrate courtesy to those around them. Those who choose to hold a door open for the janitor pushing his cart, or who help younger children find their way to their classroom, and who are willing to help rather than take some free time, shine as individuals in a room full of children who are more focused on themselves.

Courage is a tool that is often neglected in our society. The Cowardly Lion in the Wizard of Oz knew that he was lacking in a big way. “What makes the elephant charge his tusk in the misty mist or the dusky dusk? …Courage!” As parents we want to make everything easy for our kids. We have a tendency to interfere and force others to accept our kids, rather than teaching them to face their fears head-on. Your child may be facing a new school, harder classes, public speaking or the school bully with the coming of this new school year. Arming her with courage will help her throughout her life, while interfering and making sure that she’s accepted sets her up for eventual failure.

Confidence is one of the biggest and most necessary school supplies that every kid needs, and few of them possess. Certainly not every kid can do every thing. Mary might not be able to swim the length of the pool, and John might never hit a home run. But confidence is what it takes to find out what they are able to do. Kids need to understand that it takes confidence to learn, confidence to find their strengths, and confidence to fail without giving in to defeat. Thomas Edison tried numerous times to make a light bulb. After the first few times, discouragement would have been a natural response. But Edison’s confidence gave him the ability to say, “I have not failed. I’ve just found 10,000 ways that won’t work.”

Courtesy, Courage and Confidence aren’t found at Staples. They’re not gained by reading about them. So where do you find them? The Fort Wayne ATA Martial Arts Schools have endless supplies! The American Taekwondo Association believes that martial arts should be so much more than just learning physical self-defense techniques, but should include the development of a solid character as well. At the Coventry, Dupont and Stellhorn Taekwondo schools, students from age four to ninety four learn about the Three C’s in every class. By being shown courtesy from high ranking black belts, white belts begin to develop courteous attitudes in and out of classes. The courage to try is something that is fostered with each new form and board break. And confidence comes in the “Yes I Can!” idea that it might not be possible today, but tomorrow is still possible, as demonstrated in the motto of the ATA’s founder, Grand Master H.U. Lee. This year when you send your kids off to their first day of school, make sure they have the supplies they need. Make sure they have the Three C’s: Courtesy, Courage and Confidence.

Oh, and don’t forget the highlighters.